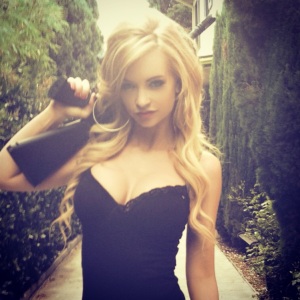 Sometimes, when you look at someone’s IMDb page and see the shear quantity of roles they land in a year – you just have no clue how they manage it.  Mindy is unquestionably one of those cases.

With roles in V/H/S/2 and American Slaughter, she is a Horror Queen on the rise.

How do you feel about horror movies’ role in popular culture?
Pop culture and horror movies have always been tied together….vampires become popular, then zombies and so on…sharks are in right now, right? Someone put me in a shark movie quick!

What’s your favorite horror movie?
I like Carrie because it was probably the best revenge story ever told.

What was the best advice that you have been given and who gave it to you?
I’ve been given a lot of advice…and I’ve ignored all of it. Only I can come up with the best solution for my problems and strategies.

What advice do you have for up and coming Horror Queens?

Don’t do nudity for free because a director tells you “that it’s a great opportunity for you”….the movie will never see it out of post production and into decent distribution if it doesn’t even have the funds for a nudity bump.

Do you have an actor who you are dying to work with?
I would really like to work with Goldie Hawn, she’s an idol of mine.

What role are you the most proud of?
For my most serious character I’d say Madison in Joe Hollow’s “A Blood Story,” for scariest character I’d say the red devil from “Killjoy Goes to Hell,” and the most fun was Pom Pom Kitty from “King of the Nerds.”

Any new projects we should be on the lookout for?
I just finished a comedy called “Live Nude Girls” with the likes of David Foley and Andy Dick, King of the Nerds is filming Season 2 right now, and I’ll also be appearing on up and coming episodes of It’s Always Sunny in Philadelphia, Tough Love, and Tattoo Nightmares. Right now 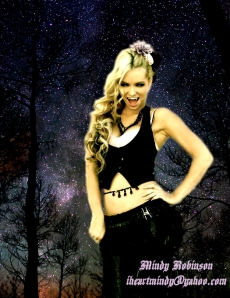 VHS-2, Casting Couch, The Haunting of Whaley House and Helen Keller Had a Pitbull are all available to rent online at Netflix, etc. Reruns from other shows seem to play all the time as well, lol. I also have my own horror web series called Veronique Von Venom that you can catch whole episodes online on You Tube.

What scares you?
Mayonnaise, it looks like chewed up brains, it’s oily as hell, and I believe that it is also French.