FASTBALL releases new music ahead of 30A Songwriters Festival

FASTBALL will be hitting it out of the park in 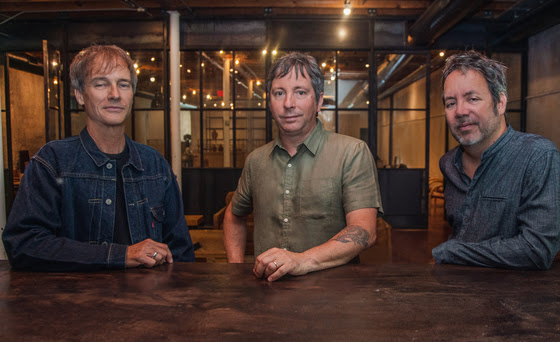 Fastball’s new album The Help Machine follows on the heels of their acclaimed 2017 release Step Into Light. The 11-song set, on the Austin, Texas trio’s own 33 1/3 label and due out October 18, 2019, once again demonstrates the distinctive songwriting, expressive vocals and inventive melodic sensibilities of Zuniga and his bandmate Tony Scalzo. With drummer Joey Shuffield completing the longstanding lineup, the band’s time-tested creative rapport is as potent as ever on such tunes as Scalzo’s “White Collar,” “All Gone Fuzzy,” and “The Girl You Pretended To Be,” and the Zuniga compositions “Friend or Foe,” “Holding the Devil’s Hand,” and the album’s enigmatic title track.

“Steve became an integral part of the team,” Shuffield asserts. “He’s a really positive guy, he’s got a great ear, and he helped us come up with some great sounds. His personality fit right in to what we were doing, and he understood where each of us was coming from. He just about drove us into the ground; it would be one or two in the morning and he’d say, ‘All right, what do you guys want to do next?’”

“Steve was the perfect guy to produce this album,” adds Zuniga. “We worked really fast. We did it in ten days, and we didn’t really need the last three.”

Recording at Austin’s Treefort Studios with engineer Jim Vollentine, who’d worked on Fastball’s 2004 release Keep Your Wig On, the band and Berlin maintained an organic creative atmosphere that allowed the band members to break out of their respective comfort zones. Scalzo didn’t even play his usual instrument, bass, on the sessions, instead tackling new challenges on keyboards and guitar. The group brought in old friend Bruce Hughes (formerly of Cracker and Poi Dog Pondering) to handle the album’s bass parts. Other guest players include Austin legend Charlie Sexton, who adds guitar on “The Girl You Pretended To Be”; Wye Oak member Andy Steck, who plays multiple instruments on a pair of tracks; and Band of Heathens members Gordy Quist and John Chipman.

“We had a great time in the studio, and the whole thing was a very creative experience,” Scalzo notes. “When Fastball started out, we were almost like two different bands, and Miles and I tended to be careful to keep our hands off of each other’s songs. But now, we just view them all as Fastball songs, and we generally feel free to mess with them. It works better that way.”

With nearly a quarter-century of music-making under their collective belt, the members of Fastball continue to extend and expand the band’s widely loved body of work, which encompasses such memorable albums as their 1996 debut Make Your Mama Proud, their 1998 platinum breakthrough All the Pain Money Can Buy (which spawned the Grammy-nominated Top Five hit “The Way”), 2000’s The Harsh Light of Day, 2004’s Keep Your Wig On, 2009’s Little White Lies and 2017’’s Step Into Light.

“When I look at our catalog, there’s not a bad record in there,” Shuffield opines, adding, “We’ve been through our ups and downs, but I think we’ve really found our groove over the last few years. We spent a lot of time on a major label, so initially the transition back to being an indie band was a little bumpy. But now it feels comfortable being responsible for everything ourselves, because that way we’re more likely to get it right. We’re all so into the music now, and I think you can hear that on the last couple of albums.”

“It’s only natural,” Scalzo adds, “that you get better at what you do as you get older and more experienced. But you can’t always figure that out when you’re in your 20s. Now that we’re on our own label, the pressure’s all on us, and that’s fine. All I ever really wanted was a consistent creative outlet, and we’ve got that now.”

The ongoing resonance of Fastball’s music is reflected in the personally charged passion of Fastball’s ardent fan base. Shuffield: “We’re always meeting people who tell us how we helped them get through college, and we have whole families that come to the shows now. At nearly every show, we’ll meet people who’ve flown in from other states, or other countries, to see us play. That kind of thing really warms the heart, and makes us feel like we’re doing something right.”

“We’d love to have another massive hit single,” Zuniga reflects, “but you can’t really plan that. We’re living in a different world now, and all we can do is just make the best music we can. When you’re young, you’re insecure and trying to get attention for yourself. But when you get a little more mature, you start to care more about what’s right for the music. When I was in my 20s, I was always trying to impress people. But now all I care about is making great music, and I think that the whole band feels that way.

“We’re all grown-ups with kids now, so there’s more of a sense of urgency now,” Zuniga concludes. “We’re all still here, everyone’s healthy, and we all still feel like if we’re going to do something, we should do it now. I don’t want to wake up ten years from now and wonder what I did with my time.  We’ve still got things we want to do, and I think that our attitude now is ‘Let’s get this stuff done, there’s no time to waste.’”