Assumption labels themselves a touch different than I would (see their official press release below). I hear a ton of parallels to 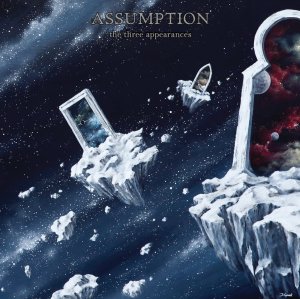 Obituary in their sound – and that makes me giddy.

Yes, I just used giddy in a death metal review.

The Three Appearances can draw in southern sludge, drone, and death fans. The entire sound of the album is gritty and warm – the production leans on an earthy style instead of a super clean one. We aren’t talking about full blown lo-fi black metal style, but the songs have a fullness that is perfectly in tune with the style of the band.

Check out their official press release and bandcamp link below.

Assumption are part of a quest for transcendence.

Doom/death metal with psychedelic touches may seem an awkward vehicle for such a peculiar and ambitious goal. But this is exactly what we do and it couldn’t be any other way. This relatively useful introduction is the basis of a very simple story.

Assumption was formed by Giorgio Trombino and David Lucido in Palermo, Italy in 2011. The idea came about, after almost two years of plans and dreams, as an output for slow music that couldn’t be brought in our projects Haemophagus, Undead Creep, Morbo, Sergeant Hamster, Elevators to the Grateful Sky etc.

Some of the riffs you can hear on our very first demo “Mosaic of the Distant Dominion” (released in 2012 by Unholy Domain Records on cassette and by Decrepit Productions on enhanced CD-r) had already been written in 2008/2009.

Assumption’s lyrics deal with separation of the spirit from the body, cosmic/Lovecraftian horrors and the likes.

These themes have been furtherly developed on our mini album, “The Three Appearances”, whose title-track’s lyrics are based on the stages of the human body and mind while meeting death as codified by the Nyingma School of Tibetan Buddhism.

The music is even more oppressive, with extremes being pushed in all directions. It’s slower (at times faster) but also full of haunted ambiances and moments of otherworldly Vision.

Mixed and mastered by G. – everything done in early 2014.