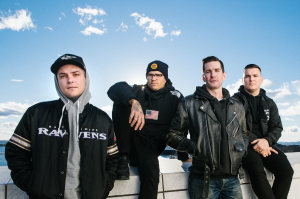 The song appears on the band’s upcoming album Everyone Loves You… Once You Leave Them. The album arrives tomorrow, February 21, and is the band’s Pure Noise Records debut. Pre-order it here.

“‘Forever’ is a song about the dueling internal narrative while in the depths of a depressive episode,” says singer Joel Birch. “On the one hand, love and support, on the other hand, thoughts of suicide, while also grappling with the follow on effect it would have. I made a promise to myself to make it to my son’s eighteenth birthday when he was three, and I intend to keep it. Hopefully by then I will have figured out how to properly cope with what is likely a lifelong battle with Bipolar II.”

The Amity Affliction — Joel Birch [vocals], Ahren Stringer [vocals, bass], Dan Brown [lead guitar], and Jon Longobardi [drums] — previously released the video for  “Soak Me In Bleach.” Watch it here. The band also premiered the new song “Catatonia” over at Loudwire. Listen here. Prior to that, the band roared out of the gates with “All My Friends Are Dead.”

“This album is a result of our re-found love for heavy music,” The Amity Affliction said upon announcing the record. “We wanted to make a heavier album to back up our most recent releases to let our fans know that we understand what the majority want to hear from us. We have experimented creatively over the years and are now able to apply what we’ve learned to what we consider the perfect blend of Amity new and old.”

ABOUT THE AMITY AFFLICTION:
Since emerging in 2008 on the debut Severed Ties, The Amity Affliction have served up two ARIA gold-certified albums, Youngbloods [2010] and Chasing Ghosts [2012], and earned a platinum certification from ARIA for the seminal Let the Ocean Take Me [2014]. This Could Be Heartbreak [2016] marked the band’s second consecutive Top 30 debut on the Billboard Top 200, while Misery [2018] elevated them to new critical heights with praise from Medium, Alternative Press, The Noise, and more. To date, the group’s total stream tally has surpassed 200 million and counting. Meanwhile, The Amity Affliction sold out countless headline shows and toured alongside many genre heavyweights. During 2019, the musicians returned to Beltsville, MD to record their Pure Noise Records debut, Everyone Loves You… Once You Leave Them, alongside Misery producer Matt Squire.