SandJam Presented by Pepsi announced this morning that Shinedown, 311 and Weezer will headline the 3rd annual rock music festival set for April 24-26, 2020 at Panama City Beach’s M.B. Miller Pier. Another 20 acts are scheduled to perform on two massive stages set right on the beautiful white sand over the three days.

Tickets will be available beginning Friday, November 29 at www.SandJamFest.com.

“To be able to hit the ground running with a lineup like this is incredible,” said SandJam Executive Producer Rendy Lovelady. “The headliners alone have over 12 million social media followers, so we’re anticipating thousands of avid fans heading to PCB in April.”

Unique to large-scale music festivals, the two stages face each other at opposite ends of the beach. The opening act performs on one of the stages, and subsequent artists alternate between the two, so there is very little down time between performances. Music will be virtually non-stop over the three days.

“Transforming the M.B. Miller Pier area into a music venue is fascinating,” said SandJam COO Mark Sheldon. “We lay hundreds of sheets of DuraDeck, the same material used by the military to build temporary roads, on the sand to accommodate heavy equipment moving tons of gear, staging, sound and lights into place. The same material acts as sidewalks to help with accessibility during the festival.” 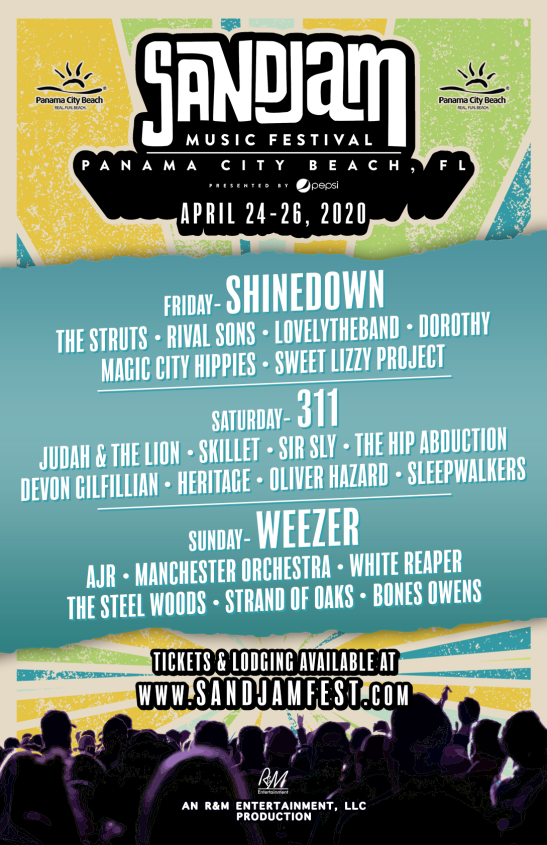