When we heard that our friends in New Earth Army were seeking crowdfunding for their next release – we wanted to write up something special for them.  After all, they are the brains and the brawn behind Okalossa RevFest.

Before we had the chance to start on something – like fork over 2k and Mike’s beard’s fate is in your hands – an email arrived written by the folks over at Emergent… which we have shamelessly copied and pasted below. 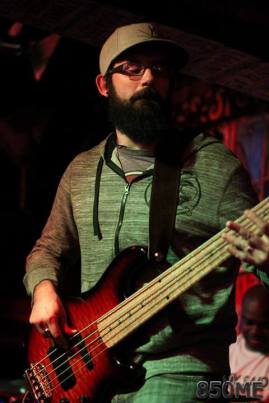 New Earth Army, the Florida Panhandle based funk/blues/jam band, is in the process of recording our SECOND full length album, Musikizinew (pronounced “music is in you”). Our first full length album, Action, was recorded in the quaint living room of bassist Mike Flatau’s house. It was then mastered at Emergent Recording and Production in Valparaiso, FL, where NEA and Emergent really began to form a good business relationship. New Earth Army’s album Action received two nominations in this year’s Beachcomber Music Awards, for Best Homegrown Album and Best Original Song with “Tears”.

When Emergent heard NEA was going to record a new album, they jumped all over it! NEA and Emergent decided to join forces to create an amazing album, Musikizinew.

We are just about finished recording the tracks and Emergent Recording and Production is tirelessly working on the mixing and mastering of the project. We are just looking for additional funds to get the physical discs produced, distributed, and registered.

We have a LOT of very cool personalized schwag for those that donate! Everything from an early download of the album and personalized “Thank You” from the band, to a home cooked meal and an acoustic show in your living room provided by NEA! This is a great way to get to know us on a personal level and to really be a part of our album, Musikizinew!

By donating, you will help New Earth Army realize our goal of our FIRST full album to be recorded in a professional studio. When you listen to our album, you will know that you played a huge part in that booty-shaking beat that makes you groove in your car seat as you get down to tunes like “Musikizinew” or “Without Your Love”, or that spine tingling high note that Carly hits as she belts out her soul in songs like “Lens of Love”, and especially when you sing along to the catchy 80’s video game inspired song, “My Favorite Game”, you will know it was YOU that made it happen.