To Jennifer Has a Release Date!

TO JENNIFER, the first feature film shot, edited and distributed on the Iphone 5 has a release date! 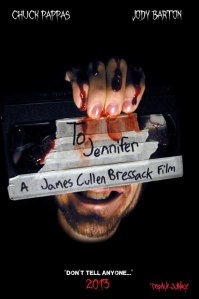 We did a review of the movie here.

The film releases on DVD and VOD on October 15th the same day as Bressack’s other film HATE CRIME (being released by UNEARTHED FILMS). An official APP for iphone 5 including the full film through APPLE and ZOOVISION will soon be released as well.

This is the third feature film by JAMES CULLEN BRESSACK, the writer and director of the film HATE CRIME. Shot entirely on the iphone 5, ‘To Jennifer’ stars Chuck Pappas, Jody Barton (Hate Crime), Jessica Cameron (Silent Night), Maria Olsen (Paranormal Activity 3) and James Cullen Bressack and features a cameo from American Mary’s Tristan Risk. The film is being produced by Bressack, Pappas, and Jarret Cohen under the Psykik Junky Pictures umbrella.

One comment on “To Jennifer Has a Release Date!”