A sense of humor – a solid band – and classic tunes.

With only three members, Modern Primitive will blow your socks off. 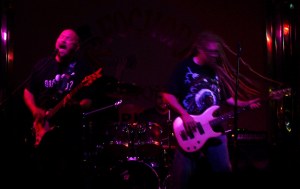 I feel a little guilty writing this review for two reasons; we didn’t stay as long as we normally do before I write a review, and I have no video to share.  However, I will just use that as justification to write a part two in the future.

I have noticed the sign at Foghorns a time or two, lit up with the band name Modern Primitive.  Each time I would think, “Cool name.  Wonder what they play?”  I now know the answer to that question; everything.

In the short span that I was there I heard a great cover of a Stevie Ray Vaughn song – the guitar work was just superb on that, a Bush song, and a cover of Margaritaville with new lyrics for Panama City Beach that turned it into a R rated song.  There were a couple of country-ish songs thrown in the mix as well – making for an interesting set that included something for everyone in the crowd.

Another great surprise was running into Matt – the guy on the right – who is a member of DeadRingers Guild.  A solid metal outfit that is based out of Panama City – and just puts on a great show.   They have been on hiatus for a little while, but still do a occasional show in the area.

Unfortunately I can’t find much of an online presence Modern Primitive – so for the time being it is by the luck of draw getting the pleasure to see them perform.  (Or do what I do, and friend Matt on Facebook.)  But, if you happen to be out one night, and see “Modern Privative” lit up on a venue’s sign, know that you are in for a good night. 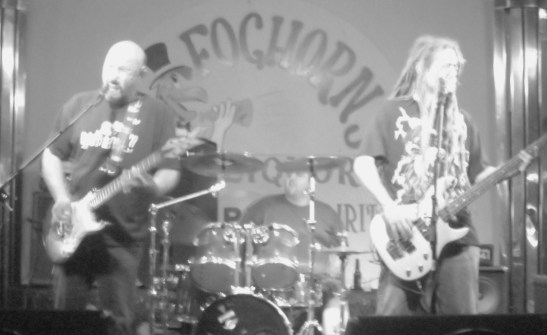