The band Terrorizer called, “a whirlwind of booze, denim jackets and riffs,” began kicking out the corrosive jams in basements and bedrooms some twenty years ago, building a punishing legacy of mutant thrash and filthy street punk that’s outlasted the heydays of the genres that spawned them. Founder Joel Grind, the headband-wearing headbanger whose dedication to the one-man-band ethos gives the late Quorthon a run for his money, melting down the greatest punk metal crossover riff collection imaginable into nuclear ooze. With each successive release, Grind repurposes the most visceral strengths of speed, thrash, and punk through his own unique prism, making for new (and certainly not “nü”) metal anthems that consistently reignite a circle-pitting feeding frenzy in the scene.

A dystopian technological takeover drives the album thematically, but the passionately delivered music is vintage TOXIC HOLOCAUST, taking things all the way back to the band’s early origins. “When I started the band in 1999, I never imagined I’d still be doing it in 2019,” Grind explains.

“It’s been a long time coming but the new album is finally ready and it’s sort of a culmination of my past twenty years of doing this band. Most notably, I decided to go back to my roots and record this entire album by myself and play all of the instruments like I did in the early days. It was a lot of fun and nostalgic and at the same time exciting to be able to apply everything I’ve learned over the years.”

Primal Future: 2019 was recorded, mixed, and mastered by Grind with artwork by Steve Crisp. In advance of its release, a lyric video for opening bruiser, “Chemical Warlords,” has been unveiled. “‘Chemical Warlords’ opens the album and sets the tone for the rest of the record. My vision for this album was sort of a cyberpunk dystopian future. Enjoy!” 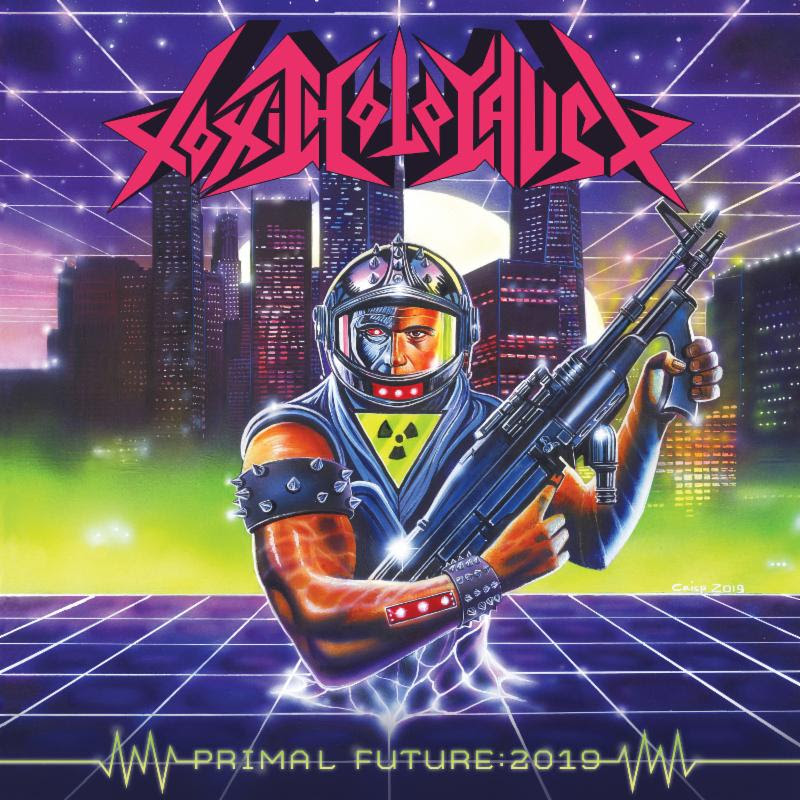 TOXIC HOLOCAUST will join Gwar’s massive North American Use Your Collusion Tour next month. The journey begins September 16th in Grand Rapids, Michigan and runs through November 5th in Indianapolis, Indiana. Additional support will be provided by Sacred Reich and Against The Grain. See all confirmed dates below.

TOXIC HOLOCAUST was the cover story of the same Decibel issue that inducted Venom’s Black Metal into the magazine’s Hall Of Fame. They’ve toured the world with genre legends, including Danzig, Gwar, Satyricon, and Discharge.

When LA Weekly compiled a list of the Top 10 Crossover Thrash Bands ever (a list that included Suicidal Tendencies), TOXIC HOLOCAUST was name checked as part of an elite few carrying the, “music that slam dancing was made for,” torch, alongside Municipal Waste, Iron Reagan, and Trash Talk.

TOXIC HOLOCAUST was born when Grind was just seventeen years old. A rural teenager weaned on metal mix tapes, punk vinyl, and the Big 4, he was determined to conjure forth his vision of what an ideal band should sound like; what their iconography looks like; how the whole thing should feel. Early on, the frontman wrote, performed, and recorded all of the band’s music, unleashing a series of seminal demos followed by more than a dozen albums, compilations, EPs, and split records, with now classic jams like “Acid Fuzz,” “Nuke The Cross,” and “Bitch” (heard on TV biker drama Sons Of Anarchy) amassing millions of streams and views on Spotify and YouTube alone.

Now, in the same year Linda Hamilton, James Cameron, and Arnold Schwarzenegger return to the Terminator franchise, TOXIC HOLOCAUST reemerges from the shadows with a freshly mutated reincarnation of its original spirit, one mechanically rebooted with Judgment Day-like analog fury.

“Where I grew up there wasn’t really a music scene, which is a big reason why TOXIC started as a solo project. Once I was able to drive, I was able to go to Philadelphia, Baltimore, New York, and other places with great record stores that stocked underground releases,” Grind recalls. “It was then I started to discover bands like Aus-Rotten, Nausea, and other crust-punk, which I wanted to incorporate in the thrash I wanted to make. The best bands create something by throwing everything they love in a blender. Why steal from one or two bands, when you can forge your own sound from many inspirations?”

In the six years since Chemistry Of Consciousness (2013), an album Metal Injection hailed as, “a bottled up riot distilled into musical form,” Grind sharpened his skills as an engineer, producer, and composer, working on everything from synthesizer-drenched ambience to epic film scores. “Primal Future takes listeners on a bit more of a ‘journey,’ but all of the elements are still there – the hooks, the riffs,” he promises. “The arrangements are bigger.”

TOXIC HOLOCAUST going back to its DIY roots blew the doors open on a new chapter for the man who is the band’s nucleus. It’s a sonic re-splitting of the atom, ushering in the next twenty toxic years of crossover thrash devastation.