The question is: Are you a horror fan? If you are, you’ll find Hell’s Kitty of fun romp littered with guest stars from the horror genre. 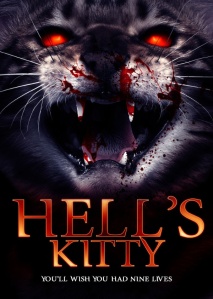 It’s ultra-low-budget with a few surprises and homages, making it a fun flick worth watching. If horror isn’t your thing, the references might be obscure enough that a non-fan would miss the fun. From character names to set direction to props and an appearance by a very special clown – Hell’s Kitty will leave a horror fan thoroughly amused.

The plot centers around a guy that just can’t catch a break, but things are about to get worse. Is his cat out to get nearly everyone? It’s possible.

The kitty’s owner is played by Nicholas Tana who also is the writer and director of Hell’s Kitty.

The tone of the movie is more in line with an 80’s schlock-fest. It’s fun, it’s tongue and cheek, and it definitely isn’t taking itself too seriously. I mean after all, we are dealing with a potentially demonic kitty cat, how serious can we be?

Based on the web series and comic book of the same name, and inspired by writer-director Nicholas Tana’s experiences living with a professedly possessed cat, Hell’s Kitty tells of a covetous feline that acts possessed and possessive of his owner around women