Chamberfolk: Three classically trained musicians playing original music, as intricately arranged as a string quartet, lyrically rooted in the singer/songwriter tradition, and wrapped in three-part vocal harmonies reminiscent of both Appalachia and Medieval Europe. Building from the tonal depth of the cello (or is it a bass?), layer in the shimmering sounds of a violin and the strikingly natural addition of banjo to create a sound at once familiar and impossible to categorize. Unapologetic genre-benders, Harpeth Rising fuses Folk, Newgrass, Rock and Classical into something organically unique. The three musicians each hold classical performance degrees from some of the most venerated schools in the world: Indiana University, Oberlin, Eastman School of Music. Hallmarks of their music include expansive three-part harmonies, consummate musicianship and a deft, yet soulful, lyrical perspective. Touring internationally, their previous performances include the Kerrville Folk Festival, Cambridge Folk Festival, London Folk Festival, Blissfest, Woodsongs Old-Time Radio Hour, and The Bluebird. 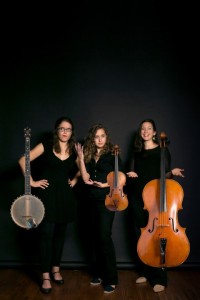 Harpeth Rising’s latest release, ‘Shifted’, debuted at #1 on the Folk-DJ Charts for August of 2015. The opening track, “I Am Eve (I Am the Reason), also debuted as the #1 song on the same chart. FATEA Magazine has called the album “truly resplendent” and Midwest Record has said that it is “taking back lyric writing as a form… this set is going to blow your mind.” This constant innovation combining old and new genres of music, technical mastery, thought provoking lyrics, and heartfelt sensibility has earned Harpeth Rising the distinction of one of the most engaging and dynamic new groups in folk music today. Harpeth Rising will officially release their brand new album, ‘Against All Tides’ at the Landhaven show. This project features 11 tracks – eight new original songs, two David Greenberg originals, and one song by civil rights activist, folk music icon and lifetime inspiration, Joan Baez.

Harpeth Rising will release their brand new album, ‘Against All Tides’, at the Repertory Theatre on Wednesday, March 14th, and Thursday, March 15th at 7:30 PM. The Repertory Theatre is a world-class regional theatre and one of the premier arts destinations in Northwest Florida. Tickets are $25 and are available online at www.lovetherep.com. The Rep is located at 216 Quincy Circle, Santa Rosa Beach, FL 32459. Tickets may be purchased online and by phone at (850)-231-0733.