“MADNESS,” GUNS, AND 20 YEARS OF ALL THAT REMAINS: PHIL LABONTE SPEAKS TO 850ME

Phil Labonte is a man constantly on the move. Even during this supposed downtime, he is constantly moving between interviews – literally. “You caught me in the car on the way home,” Labonte says in an eased deadpan. I get anxious and apologize for the rushed nature of my phone interview, but the deadpan is him in a relaxed mode. “Dude, no worries. Happens to the best of us.”

Since spring of this year, All That Remains and the energetic frontman have been working non-stop, touring in support of their most recent effort – their 8th studio album, ‘Madness’. Between sharing the stage with acts like Korn, The Devil Wears Prada, & Falling In Reverse, making guest appearances at Five Finger Death Punch shows (of which, Labonte replaced beleaguered FFDP frontman Ivan Moody for a series of dates last year), and embracing a sort of viral sensation this summer with their heavy-yet-endearingly-faithful cover of Garth Brooks’ supernova of a song, “The Thunder Rolls” – the band has been headlining shows with boundless energy. They’re truly utilizing what little time they can manage between all the… Well, madness.

For now, they are taking a well-deserved bit of time off. “I’ve been spending a lot of time at the gun shop, honestly,” laughs Labonte, “Me and a partner – we have a gun shop in New Hampshire. I’ve been spending a lot of time going to the gym too. It’s nice to have the freedom to say ‘I wanna do something’ or ‘I don’t want to do anything,’ but having nothing specific to do all day…it can get tedious. You gotta get out of the house.”

Between talking guns to preparing for a winter tour with Alter Bridge (which makes a solo, ATR-only stop at Club L.A. in Destin, FL), we caught up with Labonte on All That Remains’ past, present, and future.

Rob Perez: How has the reaction to “Madness” been so far, particularly in the live format?

Phil Labonte: Really cool. I think the new songs have been going over really, really well. We’ve been doing “Halo,” “Madness” has that really easy, head bob thing going on….”The Thunder Rolls” has made its way to the live set. And it seems like EVERYBODY knows that song. (laughs). It’s been great, people have been really digging it; these shows have been really fun to play.

Let’s talk about “The Thunder Rolls.” How does a cover like THAT even come about? Did you all just say “fuck it – let’s do this?” (laughs)

Well, I’ve been a fan of Garth Brooks for a long time. My mom listened to country music when I was growing up, so as a kid, the closest thing I could even get to rock with her was Garth Brooks. So, in that, I really became a fan. I’ve always thought this song would do really well as a metal song because it’s really dark. It’s a dark sounding song already that could really translate well and cool heavy. I talked about it before with the guys in the band, and we just never felt it was the right time to do a cover. For this particular record, our producer (Howard Benson) said “Hey, maybe we should do a cover,” so I said, “Hey, I’ve been thinking about this one for a while…”

And the fact that you could just take this insanely well-known country song and make it your own is just great. One of the things that – as a fan of yours from a musician’s standpoint – that I admire is that you all really do give zero fucks when it comes to “genre.” Is it fair to say you really wear your influences on your sleeve?

Thanks, man! I’ll definitely take that “not giving a shit” statement as a compliment. And yeah, that’s just it – I’m a MUSICIAN. It’s odd that it’s really frowned upon by some people in the metal community, but I’m a musician before I’m a metalhead. I understand there’s a lot of tribalism that goes along with being a metalhead, but for me, I’m not a tribalist kind of guy. I just like what I like…and I’m glad it does translate into our music.

You had mentioned earlier your producer had made the suggestion of the cover. Circling back to that, Howard Benson is definitely known more for bands like Three Days Grace, Seether, or P.O.D. before All That Remains. This new record definitely showcases a different ATR sound because of that. How did that come to be?

Our management linked us up. We went out to California, hung out, had some conversations, and we all felt like his approach would be a really cool way to try and write a record. Everyone in this band has had their own sort of ‘experience’ with each record – some records I didn’t enjoy doing and the guys did, some records I enjoyed doing and the guys didn’t – but this one was an overall just enlightening experience for everyone just because of Howard’s approach and sound.

You started this whole thing as a side project back in 1998. Which, of course, means that next year equals 20 years worth of All That Remains. Has that even crossed your mind yet?

There’s definitely been a moment of “Oh my God, I can’t believe we’ve gotten this far.” (laughs) There’s been a whole lot of that. We’ve talked about doing some kind of release, some kind of tour – nothing solidified, of course. We plan to do SOMETHING about it – 20 years is a big deal.

Absolutely. In this climate in the music industry, it’s hard enough to get a rock band going, much less 5, 10 or 20.

It could be argued that, as far as the time to be in the music business, these last 20 years has probably been the hardest in its history. And it’s progressively gotten harder for bands like us each year. I’m pretty proud of the fact that we’ve been able to have the privilege to put out 8 records…20 years of being able to entertain people, play shows….It’s pretty special.

So, here we are. The record is doing great, you’re doing great, gearing up for the Alter Bridge tour, and our home is one of the solo stops. It’ll be your guys’ first time at Club LA – do you all still get pre-show jitters for new places like ours?

It’s definitely not “another gig, another day.” I don’t want to trivialize it. Having said that, when you’re heading to a new club, you never know if it’s gonna be hit or miss. From our perspective, you don’t always know how the venue is gonna be, you don’t know if the venue normally has shows like us. We may not get worried or jittery about the show itself, we get jittery about the logistics. (laughs) Is the crowd cool? Is the venue cool? Those kinds of things.

Good! It’s been too long since we’ve been to Florida anyways. We can’t wait, man!

Join All That Remains at Club LA, December 1st.  Learn more at http://www.RockDestin.com. 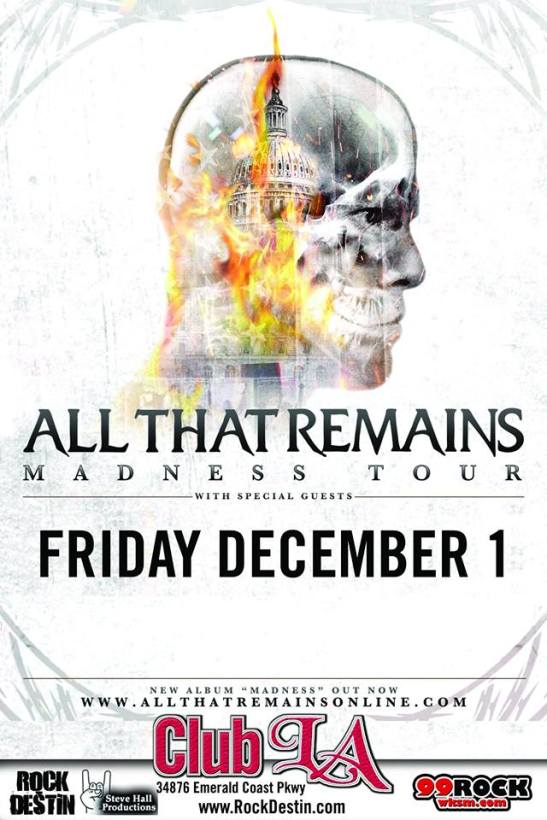