>When material from James Cullen Bressack was last featured here at 850ME, it was under much different visual circumstances. His name was all over the 2015 lo-fi madhouse Dysmorphia, a series of home video shorts strung together by a just-enough plotline to keep everything in motion. While micro-budget, the seeds of true workmanship were there. There was something hungry driving this thing along, which is why it got the praise that it did on this site (see review here). Fast forward a couple years and several features later, Bressack brought an evolutionary leap to his directing style with Bethany – a very taut piece of paranoid horror. 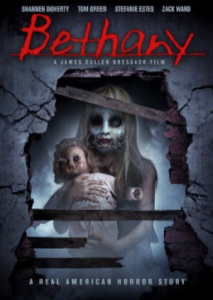 The story of Claire (Stephanie Estes) and Aaron (Zack Ward, who co-wrote the film with Bressack) begins with Claire inheriting her childhood home from her deceased, not-so-dearly-departed mother, Susan (played by Shannen Doherty, expertly chewing up her scenery in full Joan Crawford mode). From there, memories and traumas resurface, along with Claire’s invisible childhood friend – we’ll give you one guess as to her name. As the lines begin to blur between memory and reality, that’s when the real creepiness settles in…. and it doesn’t let up until the story’s conclusion, which is equal parts tense and moving thanks to Estes’ performance.

Although the film is not without its gore (and there is plenty to go around), Bethany’s horror primarily relies on the emotional wounds placed due to traumas past and present. ‘How does one keep from becoming the same type of monster that created you?’ is the question often subconsciously asked. Separate sequences involving a piano lesson and a mental hospital patient are particularly unnerving while using minimal carnage. The other real revelation here, is Tom Green (yes, THAT Tom Green) as Claire’s embattled psychiatrist. By taking on the everyman role, Green successfully removes himself from the usual comedic insanity he associates himself with and adds an air of – dare I say – light dramatic undertones that lifts the film’s horror heft (although, a sequence that calls for said insanity is quite inspired).

By mixing elements of supernatural suspense, body horror, and some dashes of j-horror, this looks to be Bressack’s aim for the major leagues…and it delivers in a big way. In the vein of such features like The Ring, Bethany has a genuine darkness that will frighten you and stay with you after the final scene.