First of all, if you are in a movie with Tony Todd it immediately puts you in the running for the title of Horror Queen.  It’s a fact of life.

Sarah Nicklin is a busy lady.  She currently has eleven films in various stages of production – and about half of them are in, or close to, the horror genre.

At what age did you know you wanted to be in the movie world?
I think it was 4th or 5th grade when I decided I wanted to be an actress. I got into it completely for all the wrong reasons…. for a boy. And not like an obtainable boy who was doing theater in school or something, but for the child start Jonathan Taylor Thomas. I was completely obsessed with him and was convinced that if we met that we would instantly fall in love and get married. And the most logical way I could think of to meet him was to become an actress and work on a movie with him. That still has yet to happen and while my obsession with him has faded, my love for acting has not.

What is your favorite part about movie making?

The collaboration and just the overall “vibe” that comes with being on a set. There are so many things that go into brining a movie to life. It passes through so many hands and each department brings new ideas to the table for how to do things or how it should look or be set up etc. It’s such great energy to have so many people doing whatever it takes to make one goal happen.

What advice do you have for up and coming Horror Queens?
Do everything you can. Especially when just starting out. As long as its not something that compromises your morals, just try to get as much work as possible. You’ll meet new people who might refer you to other projects and you’ll start to build a name for yourself simply based on people having me you or worked with you.

What was the best advice that you have been given and who gave it to you? 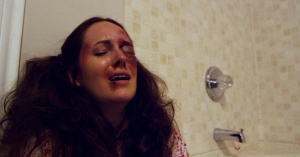 A good friend and actor I respect a lot told me early on yo build up my resume as fast as possible. And he was right. The most stuff you have on your resume (even if it’s projects that you know are crap), the more people will take you seriously. I was also told by another person to be careful to not get stuck in horror, and I think that’s very good advice as well. It’s easy to loose sight and just do horror film after horror film, but then people will think that you only do horror and won’t consider you for other roles (I know from personal experience). So while doing horror is great, don’t let it rule your career if you want to get work in places other than horror. I don’t think I’ve had anyone give me any really terrible advice that I can think of. People have said things I disagree with, but nothing I thought was terrible.

What role are you the most proud of? 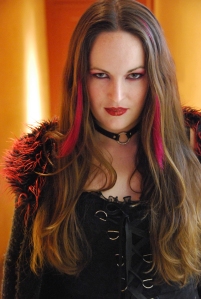 To date, I think I’m most proud of my role in Exhumed as Laura. That film has a special place in my heart and it’s one of the more challenging roles that I’ve had and also the most rewarding. I also received a best actress nomination for the role, so I guess I’m not the only one that thinks that :).

Do you have an actor who you are dying to work with?
Gary Oldman and Daniel Day Lewis. They are my two favorites by far. While I think I would be absolutely terrible in comparison, I just want to be able to see them work, see their processes and try to get a glimpse into how they do what they do. I would also like to work with Johnny Depp, just because I think that would be fun.

Any new projects we should be on the lookout for?
Exhumed just came out on Amazon and VOD, so definitely check that out.

I just finished shooting The Fetish Set, which will probably be coming out within the next year. It’s a really dark gritty piece that stars Bill Oberst Jr. who is always awesome.

I also just finished shooting at feature Normal with the same production company that did Exhumed, Nun of That and a few other fan-favorites. That should be out next year and I think it’s likely to be the best film I’ve ever worked on. Michael Reed’s performance in it (he’s the lead) is truly amazing.

(Sarah’s website has a great collection of direct links to these and other projects.)

What scares you?
The idea of running out of work and not working in film again. Or on a more “real world” basis – dark water that you can’t see through. It freaks me out if I’m swimming in the ocean and seaweed touches my leg. I also love scuba diving, but only if I’m near a reef or something, if I turn around and look out into nothing but open water, it freaks me out. Also ship wrecks scare the crap out of me. Seeing footage of the Titanic is far scarier to me than any horror movie.