Dean Haglund – Beyond the X-Files

You may have a narrow view of what a convention like Penscon offers; it’s easy to lump it all together as crazy costumes and Star Wars nerd-outs.  And while that is a big part of the convention experience – you also get to sit in a room with someone like Dean Haglund and hear him dish about his life and that super famous TV show that spawned ‘The Truth is Out There’ and ‘I Want to Believe’ posters in every nerds room.

To start with, let’s note that I am a consummate 90’s kid. My family often huddled around the TV to watch The X-Files together and it’s spin offs. It was a ritual. 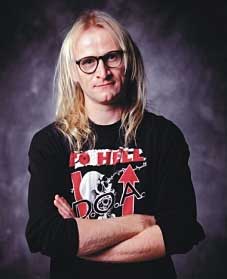 Further, the Lone Gunman helped shaped a certain idea of ultra-geekdom, with Haglund’s character combining the idea that being both a geek and being cool was possible.

Sitting in on Haglund’s panel, helped prove how cool he can be.

He kicked off his career doing open mic nights in Vancouver, and his first impression wasn’t his best foot forward. “I sucked so badly that I thought maybe this isn’t really for me.”

“The problem with stand up, is that they do stand up classes but you can’t really learn stand up comedy unless you have an audience. I think it was six months of sucking and then finally getting a few laughs.”

It isn’t a secret that The Lone Gunman started off as disposable characters. Fan reception is what saved them from only appearing in a single episode.  As such, certain details fell to the way-side.

“If you look at the three original seasons of The X-Files, the glasses that I wear are different every time, because the prop guy had a giant plastic bag of plastic glasses – and would go, ‘here, put those on’ and just throw them back in the bag,” 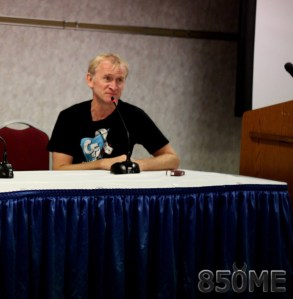 One of the hallmarks that made Haglund’s X-Files character cooler than most was that he donned a Ramones t-shirt.

A call had to happen between Fox and The Ramones respective legal departments before that could happen. The Ramones requested to see the show before giving clearance.  They liked it.  “They started watching all the X-Files episodes. Then Joey had cancer years later and all he wanted to watch were the Lone Gunman episodes. So he watched them all over and over again.”

Haglund was invited to take part in a benefit, where he was introduced to the remaining Ramones.  He spoke fondly of being a small slice of the Ramones tradition.

Haglund now resides in Los Angeles, gives walking tours that focuses on the history of Vaudeville, has a role in the upcoming dark comedy The Ladykillers, and is nearing completion of a graphic novel.

This entry was posted on June 3, 2014 by 850ME in Posts and tagged Dean Haglund, Lone Gunman, Pensacon, The Lone Gunman, the Ramones, The X-Files.