The rise of technology and the internet has completely changed the way many things work. Like any change, not all the following ripples are good, but it is undeniable that it allows a much broader platform for the little guys.

Hell, even Justin Bieber was discovered on YouTube – and I’m slightly scared that I know that pop trivia factoid.

If you have the talent and drive to stick with your dream, you are able to share it online for the world to see. You build an audience, build an interest, and can be springboarded to a much broader platform.

The Navarre based Pixies Productions is the brainchild of brothers Ian and Quinton, who are hopeful that YouTube will provide that platform. 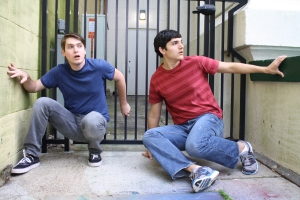 “We started when we were little kids,” shares Quinton. With their parent’s VHS camcorder in 1998 they were making “goofy things.” The seeds of Pixies Production started in 2005. “I finally bought a nice camera, and then we made kind of like medium length films – like 45 minute films. In 2007 was when we really got into YouTube. We put a few shorts on there and then overnight one of them got like a million views. So, then we were kind of hooked on the internet and doing stuff like that.”

“We didn’t think anyone would really see the stuff the made,” admits Ian. “But people were watching it and commenting and things like that. It made us think it had some kind of potential and made us do more.”

As for the content of the videos? “It’s all comedy. That is the one thing that we will never leave,” says Quinton. “We gravitate towards comedy and we can never take anything seriously – it is definitely comedy all the way.”

Right now, Pixies Productions is completely a two man project. With the brothers acting, directing, writing, and putting together everything you see in the videos. They are open to expanding their unofficial troupe, and ended up in front of the camera out of necessity. As Quinton puts it, “The funny thing is we never really wanted to act.”

The brothers are hopeful that they can expand, and they have multiple full scripts waiting for the right opportunity to be produced. They also are looking into options to host a film festival in the region.

Part of the reason that Quinton wants to put on a festival is to better connect with the audience. “The thing we don’t get to do online is met people and get to talk to them. It is one thing to talk back and forth with each other online – but it isn’t the same as one-on-one. It is the one thing that we miss and I think that is part of the reason we want to do something so badly live.”

Ian feels the same way, saying that, “Being able to be there and see people talk and laugh is so much more rewarding than just reading a comment. That drive I feel like it would make us more material faster.”

As for why Pixies Productions do what they do? “I love taking ideas and turning them into something to show,” states Ian. “I love making people laugh.”