The Rep in Santa Rosa Beach presents a very special night of music on Thursday, June 7th.  Florida troubadour Grant Peeples and Texas songbird Jaimee Harris, will come together for a show which presents two very different personalities and styles whose talents combine to strike a powerful chord. 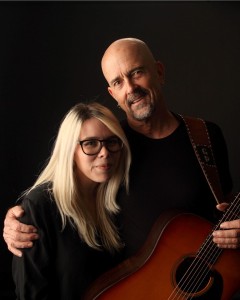 Jamie Harris has been called ‘the next queen of Americana-Folk and ‘an edgier Emmy Lou Harris for the younger generation.’  That description certainly agrees with Harris, because as a child she was forever changed by a trip with her father to the Austin City Limits Music Festival where she fell under the spell of the likes of Emmy Lou Harris, Buddy and Julie Miller, and Patty Griffin.  Later, as an emerging artist she would be mentored by Americana/Folk icon, the late Jimmy LaFave. Even before her upcoming debut album’s release, Mockingbird Lane, The Austin Statesman’s Peter Blackstock called her ‘one of Austin’s most promising young singer-songwriters.’

Grant Peeples is an award-winning singer-songwriter, poet, and visual artist who was described by Music News Nashville as ‘a guitar-slinging poet’ and by WSCA Portsmouth as ‘the Woody Guthrie of the new milennium.’  He was a finalist in the prestigious Kerrville TX New Folk Songwriter competition and is a regular performer at The Woody Guthrie Folk Festival in Okemah OK and the 30A Songwriters Festival in his home state of Florida. Peeples met Jaimee Harris in Okemah where they were both performers at the Woody Guthrie festival. He soon asked her to perform with him at other venues on the Texas/Oklahoma circuit. They are currently on an east coast tour this summer. Peeples invited her to sing on his latest release ‘Settling Scores, Vol. II,’ where her smooth and soulful vocals are a perfect complement to Peeples’ gruff yet melodious style.

The show starts at 7:30 pm on Thursday, June 7th, with doors at 7 pm. , The show will include solo numbers from Peeples and Harris, as well as duets.  The Rep shows are performed in the Seaside Meeting Hall Theatre, located at 216 Quincy Circle in Santa Rosa Beach.  Tickets are $25 and may be bought in advance at www.lovetherep.com   For more about the artists see www.grantpeeples.com and www.jaimieeharris.com