Pernicious – Does it live up its name?

The actual definition of ‘Pernicious’ is ‘having a harmful effect, especially in a gradual or subtle way‘. Pernicious as a movie does a good job living up to that moniker.  It takes three pretty girls, a seriously creepy Thai necromancy practice, a stunning location, and building tension and you have a concept of what the movie is going for.  (The occult practice does exist – but it is better to read up on it after you see the movie.  Before would spoil it a little.) 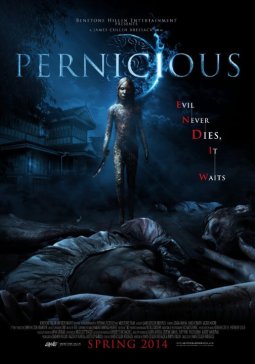 Coming to us by way of co-writer and director James Cullen Bressack, Pernicious is a classic ghost story with splashes of the red stuff.

The characters are all likable, and each gal has a distinct personality.  The lovely ladies Ciara Hanna, Emily O’Brien, and Jackie Moore all have wonderful game as horror queens.  Beyond that, they all have nice moments of strength and avoid a lot of the horror cliches that women in film are boxed into.

Although everyone delivers strong performances, Thai actor Jack Prinya gets immerse respect. Not only is his role a complex one that he masterfully tackles, but he has to do so in both English and Thai languages. He may also have one of the most memorable scenes in the entire movie, but that is up to each viewer to decide.

Did I mention gore? Instead of playing it to typical ghost story standards, Pernicious is nice and bloody. It even starts with a mysterious vignette that puts two characters in the dead column before the opening credits begin to roll. But it isn’t just sharp objects and sadism- the brutality is a vital aspect to the story line.

All the FX seem to be practical, if there is any digital smooshing it is few and far between. This is a style choice that I prefer with indie horror, and indie movies as a whole.  It helps everything feel more visceral, and holds up better with time.

From top to bottom- script to sound design- Pernicious is a well made must watch for any horror fan.

One comment on “Pernicious – Does it live up its name?”