Ryan Culwell – A Voice to Guide the Way

Ryan Culwell’s interview kind of just happened. It wasn’t planned or scheduled in advance – it was a random meeting during the 30a Songwriters Festival.

I was running between two of the Watercolor venues – bouncing back and forth like a ping ping ball gone mad. Mom was tired of looking for me. So as she smoked on the quiet pool deck, Ryan came over and started chatting.

Their conversation was about Texas, horror movies, and his general impression of the area. Then I appeared, and at mom’s suggestion, we now have this interview…

Ryan currently calls Nashville home, but spent his childhood in a quiet Texas town. “It is cliche, but I’d say if you want to be a fisherman, you wouldn’t live in the Texas Panhandle. If you are going to be a songwriter, you can write good songs, but it is hard to get them sold there.”

It took Ryan a little time to find his musical path, but the seeds of it were there early. “It was just a natural thing that I did growing up. I just did it to try to make sense of the world around me, organize my thoughts or something. I had a knack for doing silly little songs around the house.”

However it wasn’t until Ryan went off to college, that he really understood that he couldn’t escape the hold that music had on him. “I was an econ major, and that’s a long way from music. It was a long ways from my natural frame of mind.” 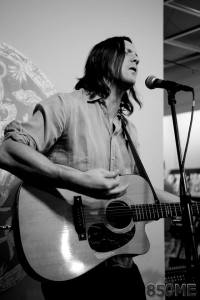 “I can’t stop (music). I would walk away it I could. I think that would be good advice for anybody in the music industry: If you can not do it, don’t do it. There are things that will allow you to be at home with your family, make more money, and have more security. But if you have to do it, you just do it.”

When it came to questioning Ryan’s inspiration – he rightly poked fun at my predictable question. “I’ve always wish that in interviews, people would ask me what do you want to eat, or do you know how to fly fish? How bad could it go? They are song writers so they should be able to formulate a thought… but my answers would be cheez its and no.”

What was the first song that really spoke to Ryan? “I’m going to go way back, like Graham Nash, ‘Simple Man’. I was like ten years old, and I basically fell down on the floor, I was crushed. My heart was broken, and I didn’t understand, like how is that happening.

“First of all, how did I get a hold of any Graham Nash? Why is that in here instead of vanilla ice or whatever. That was the kind of kid I was. I had vanilla ice too… but it crushed me. I wouldn’t have been able to articulate it. My mind wouldn’t have said this about it, but I was kind of like how did he do that to me?”

What does Ryan sounds like? “I tried to do this other thing, for many years, and then if found out that I just sound like an old man. So I should just go with that.”

Personally, my perception of his voice is a bit different. There is a gravelly-quality, but it was his sheer power made his performance at the 30a Songwriters Festival so striking. His performance was raw, authentic, and mesmerizing.

Ryan has an album coming out this Summer. “We took a lot of risks with the record. It jumps off of some cliffs. When you are doing those, you don’t know if you can hit the other side or not. If you are surrounded by the right guys, you will find out you can.”

“It is really kind of weird, because before I was just singing in the kitchen.”

One comment on “Ryan Culwell – A Voice to Guide the Way”

This entry was posted on March 1, 2014 by 850ME in Posts and tagged 30a Songwriter Festival, Interview.